Isaiah 61:2 Annointed To Preach and Proclaim!

The Spirit of the Lord GOD is upon Me because the LORD has annointed Me to preach good news to the poor; He has sent Me to heal the broken hearted; to proclaim freedom to the captives and the opening of the prisons to those who are captive; to proclaim the acceptable year of the LORD and the day of vengance of our God; to comfort all those who mourn; to give them beauty for ashes, the oil of joy for mourning, the garment of praise for the spirit of heaviness! 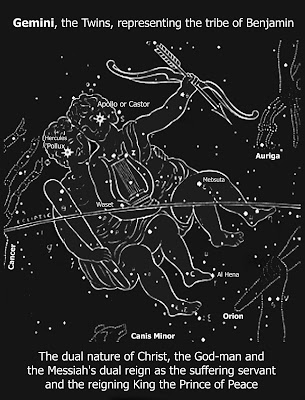 It is perfectly appropriate that Gemini would represent the tribe of Benjamin in the heavens. Remember at his birth is the first mention of Bethlehem. He was born and as his mother is dying she names him, "Ben-oni" which translates Son of Sorrows, but the Son of the Right Hand "Ben-jamin".

These names would reveal the two natures and comings of Jesus. The first coming, Jesus was Messiah Ben Joseph (the son of Joseph) and He came as the suffering servant or Son of Sorrows. His second coming, Jesus comes as the one who sits at the right hand of the Father, the Son of the Right Hand, Messiah Ben David.

This is the picture that we have in the constellation of Gemini. The Latin names for the two brightest stars of the twins is Castor Pollux and is the name of the ship Paul sailed in Acts 28:11. The alpha star known as Apollo or Castor means ruler or judge. The Beta star Hercules or Pollux has a name that means who comes to labor or suffer. The coming Prince of Peace did come and labor and suffer and returns quickly to rule and judge.
Posted by ccramergo at 3:22 PM